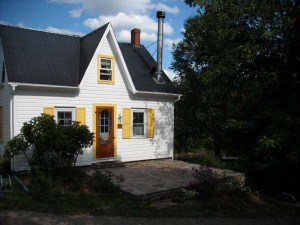 Confederation Homestead was built by James Burns in 1866. He officially received title (or a Patent) on December 31, 1866 from the Crown when he had fulfilled the obligations he was required to fulfill. These obligations included clearing at least 4 acres of land and building a home no smaller than 20′ x 16′ (the original home was this size. The kitchen was added on 50 years later). The land had many hemlock trees and therefore the house was built of hemlock, a hardy coniferous tree with very durable wood. The house and later the barn were made of hemlock.

To obtain a Patent or land grant, the applicants sent in their applications to the government (Crown) and waited and waited, often more than 10 years. James Burns along with his brother Joseph (who was given the 100 acre lot next to James’ land) were Irish immigrants.  They both applied for 100 acres each and both were successful. Once the application was approved, the applicant was allowed on to the land and was given a period of time to fulfill their requirements, likely a few years, after which time they would be granted ownership. James was given Lot 19, on Concession A, Minden Township, and Joseph was given Lot 20.  James Burns married Mary J. Britton, another Irish immigrant, October 12, 1866. She was 21 and he was 35. They both belonged to the Church of England. They had three children, William, Eliza and Martha, and we believe that James likely died young because we could find no reference to him in the 1871 census records, 5 years later, only a Mary Burns, 3 children, and a James Burns age 60, which we believe was James Jr’s father, as the marriage certificate lists James’s parents as James and Harriet.  In the 1871 census records the children’s ages were: William 3, Eliza 1 and Martha 1 month. Mary kept the property until 1874 when it was sold to James Langton (a local Minden merchant) and his wife Agnes Jeffry Langton. They had a large family and the house was too small so they sold it in 1875 to William McDonald.

The owners of Confederation Homestead have been:

The original acreage was 100, however the Eastern 50 acres was sold in 1905 to Walter Goldie. The remaining 50 acres were kept until Cavell & Len Tyrrell owned the land. They had 14 acres severed into two  parcels along Plantation Road, which were sold in the early 1990s to fund upgrades and improvements to the remaining property.

The Tyrrells did a lot of restoration over the 40 years they owned it, returning the home to a period look. The main floor bedroom (known traditionally as the “birthing room” because that is where the children were born and then mother could still direct the household from her bed), had 19 layers of wallpaper on the walls, which were laboriously removed, along with the whitewash on the logs underneath the wallpaper. The stairs to the second floor are steep and narrow because the house originally didn’t have stairs as a ladder was used to access the second floor, so the stairs were installed to fit the space that was available.

The house stayed in its pioneer condition without running water, sewage or electricity until about 1989. There was a dug well from where drinking and useable water was drawn, and an Privy outhouse. The modern amenities of sewage, electricity and a proper drilled well, were only installed because the Tyrrell’s son, daughter-in-law, and granddaughter lived there for 3 years and therefore a number or upgrades were done. About 1992-3 the second-floor dormer was installed, the sliding-glass door off the kitchen was installed, the pond was created by having it dug out of the meadow, new windows and insulated steel doors were installed. In 2000 the old wood stove that was in the living room was replaced with a modern wood fireplace, and finished to go with the tongue and grove existing wainscott in the room. The Gazebo was added to the wrap around deck about 2003-4.

When we purchased the property in 2010, we had it winterized by adding a propane high-efficiency furnace, high-efficiency propane hot water heater, upgrading and insulating the knee walls under the kitchen and upgrading the insulation in the second-floor flat ceiling. The kitchen was upgraded with new appliances including a propane stove, a fridge, and a dishwasher and a built-in over-the-stove microwave oven/exhaust fan were added. The original kitchen, built in 1920, had a new Findlay Oval wood stove installed, a high-end stove at the time. This stove, while authentic and lovely to look at, no longer met present-day fire codes, so it has found a new home with a man who has restored and installed it in his much larger kitchen to continue giving many more years of service.  We hired a local carpenter to make us new kitchen cabinets, but we wanted these cabinets to blend in and look like they had always been there. This was beautifully accomplished by taking the old hemlock logs from the collapsed log barn in the meadow and having them milled so he could make cupboard facings with this wood. Also made with the left over barn wood, a coat rack (which hangs on the kitchen wall by the kitchen door), the storage shelving that is on the kitchen walls, and the spice rack from this same old wood. We are very pleased with the results.

We refreshed the paint throughout the house, but the historic design and feel of the place has been maintained. We also had the carpenter make a new entertainment cabinet to house the TV. This too was made out of the old barn board from the old barn and blends in nicely.  To put heat to the second floor, required heating ducts, of course, and this was able to be added and camouflaged by more V-grooved paneling in the space behind the bathroom door and the door from the living room to the kitchen.

In 2011 we had new replacement  window shutters to replace the old broken down ones, and new wooden storm doors.  The outside of the house and deck were blasted with ground glass and repainted and the deck stained with Sansin Stain, a stain based on the formula used by the old Norwegian Stave Churches which have lasted since the 12th century.

As a finishing touch we had a plaque made with the names of the former owners and installed it beside the front door, outside under the light.

We welcome you to visit our hidden-away gem and see these things for yourself.